Learn How to Think with Karel the Robot. Chapter 5. Conditional Loop

5.1. Conditional loop and the keyword while

The concept of conditional loop is present in all procedural programming languages. Conditional loops allow us to repeat one or more commands without knowing in advance how many repetitions will be needed.

In the Karel language as well as in most other procedural programming languages, the conditional loop is defined using the keyword while.

5.2. The difference between the conditional and counting loops

Imagine that the robot knows that the home square lies 7 steps ahead:

The distance between Karel and his home square is 7 steps.

Then he can use the repeat loop to get there:

However, what if he only knows that the home square lies ahead, but not how far?

Figure 5.2: *
Number of repetitions is not known in advance.

Then the conditional loop while combined with the condition nothome is the right way to bring the robot safely home:

Notice that the keyword while is followed by a condition (in this case nothome). The body of the loop (line 2) is indented. It will be repeated while this condition is satisfied.

Let’s step through the last program to understand exactly what it does! For simplicity, assume that the initial distance between Karel and his home square is three steps (but the robot does not know that):

Karel’s position before the program starts.

Initially, the robot is not at his home square. Therefore the condition nothome is satisfied, and the body of the loop is executed for the first time. Karel makes one step forward:

Karel’s position before the second cycle.

Before the second cycle, the condition is checked again. Since Karel is not home yet, nothome is satisfied, and the robot makes a second step forward:

Karel’s position before the third cycle.

Before the third cycle, the condition is checked again. Since Karel is not at his home square, not home is satisfied, and the robot makes a third step forward:

Karel’s position before the fourth cycle.

In the previous section, the while loop was combined with the condition nothome. This ensured that the body of the loop was repeated as long as the robot was not home. Naturally, all other conditions that you know from Chapter 4 can be used as well. Let’s begin with the condition wall ("is there a wall in front of you?").

Karel’s next task is to climb a pyramid of unknown height: 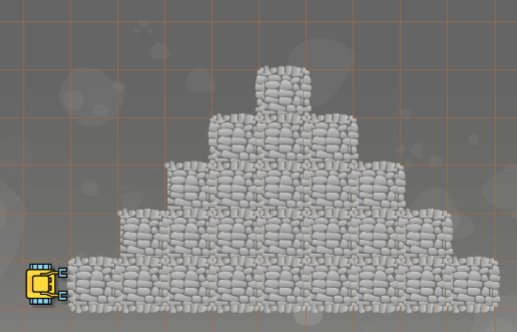 Karel is in front of a pyramid of unknown height.

This task is perfect for the while loop because Karel just needs to keep climbing, one step at a time, while there is wall in front of him. The repeating pattern to climb one step and get ready in front of the next one is formed by four commands:

When these four commands are used as the body of a while loop, one obtains the final program:

When the robot reaches the top, there is no longer a wall in front of him, therefore the condition wall is not satisfied, and the while loop ends:

After the program finishes. 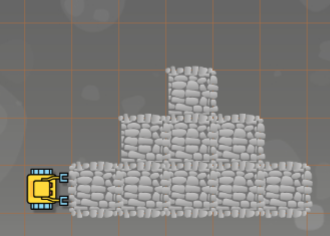 Testing the program on a pyramid of height 3.

And indeed, the robot stops on the top of the pyramid!

Let’s have a look at a while loop combined with the condition fire ("is there a fire in front of you?"). The only way for Karel to get to his home square is through a narrow gap between the flames. The length of the fire wall and the position of the gap are unknown.

Karel needs to find the gap in the wall of fire.

Here, the repeating pattern is to move one square to the right. It is formed by three commands:

When using them as the body of a while loop, and adding two more go commands after the loop finishes, one obtains the final solution program:

When the robot finds the gap in the flames, the condition fire is no longer satisfied, and the while loop ends. Then the last two lines make sure that Karel reaches the home square:

Karel needs to find the escape and enter his home square.

To check that the program works with an arbitrary length of the fire wall and an arbitrary position of the gap, let’s run it with one additional maze: 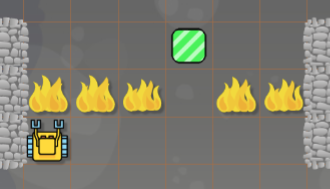 When the program finishes, the robot is home again:

5.6. Combining the repeat and while loops

Smart combinations of the repeat and while loops can make your programs more elegant and efficient. For example, imagine that Karel’s task is to run along the perimeter of the maze and collect all keys. The maze has width 15 squares and height 12 squares. These numbers are known, therefore it seems more natural to use the repeat loop. 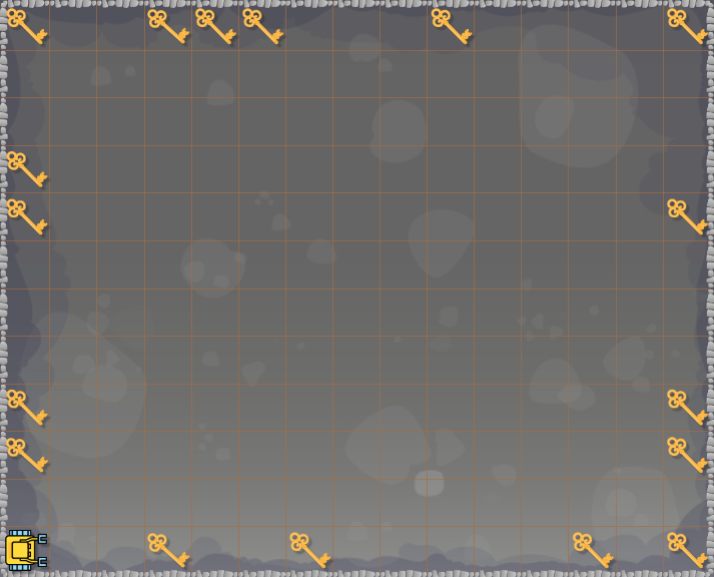 This program is perfectly correct, but as you can see, a large part of the code is there twice, just because one time we need it inside a repeat14 loop and another time inside a repeat11 loop. This can be fixed by using the while loop which automatically takes care of the different lengths of the maze walls:

This program has the same outcome as the previous one, but it is more elegant because it does not contain the same code twice.

Today let’s teach Karel how to pass through an arbitrary maze:

This can be done using the First Maze Algorithm of robotics:

It can be translated to the following code:

Let’s see what the program does! First, what happens when Karel can just go straight? 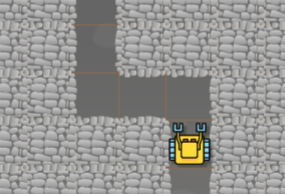 There is no wall in front of Karel.

In this case there is no wall in front of the robot, so the condition on line 2 is not satisfied. Therefore he skips lines 2 - 6, and just makes one step forward on line 7.

Second, what happens when the path goes to the left? 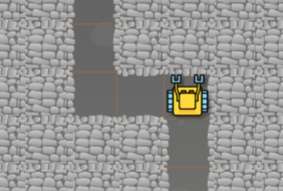 Path goes to the left.

In this case there is a wall in front of the robot. Therefore the condition on line 2 is satisfied. So, he makes a left turn. Then he checks for wall again on line 4, but there is no wall in front of him. Therefore he skips lines 5 and 6, and goes to line 7. In summary, he turns left and makes one step forward.

Third, what happens when the path goes to the right?

Path goes to the right.

5.8. Three possible failures of the FMA

But what if some of these assumptions are not satisfied?

First, let’s see what happens when Karel gets into a dead end: 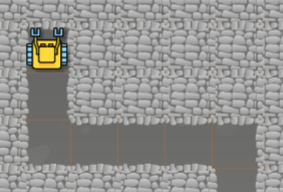 Next, why are loops in the path prohibited? Let’s see:

The path forms a loop.

In this case Karel first turns left, and then he starts circling through the loop infinitely. He never gets out of this maze!

Last, the FMA requires that the path be one square wide. To explain why, let’s look at a maze where the path is wider: 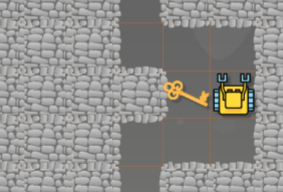 The path is more than one square wide.

In this case, the robot fails to collect the key because he does not visit all squares in the maze.

5.9. Right-handed version of the FMA

With Program 5.7, when the robot arrives at a T-intersection, he first turns left and chooses the left path. Therefore the algorithm is sometimes called "left-handed". Alternatively, we can first make him turn right, then check for a wall, and if there is a wall, turn around. This will be the "right-handed" version:

The two versions are fully equivalent when the assumptions on the maze are satisfied:

But when some of these assumptions are not satisfied, then the two versions may yield different results. For example, consider a maze with a dead end in it: 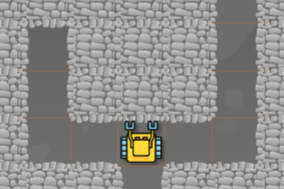 The path contains a dead end.

5.10. Other types of mazes the FMA can handle

Based on the images of mazes shown so far, you might have the impression that all the walls must be at least one square wide. This is not the case! The FMA can also handle mazes with thin walls such as the following one: 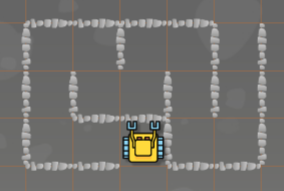 A maze with thin walls.

Here is the FMA again, step through it in your mind to make sure it will work!

As promised in Chapter 4, let’s revisit some programs we wrote there, and show that they can be improved using the while loop. We can start with Program 4.9 from page 320 which turns Karel to face North no matter which direction he is facing initially:

Using the while loop, the same can be achieved using just two lines:

1while not north
2  left

Program 4.12 from page 342 makes Karel remove all objects from his bag and place them on the ground. Importantly, because it uses the repeat loop, it needs to make an unnatural assumption that Karel has at most 10 objects in his bag:

Using the while loop, one can forget the limiting assumption, and just write

Program 4.17 from page 373 helps Karel locate his home square within a wall of fire, water and acid. Again, because it uses the repeat loop, it needs to make an assumption on the maximum length of the wall:

With the while loop, the wall can be arbitrarily long, and the code becomes much simpler:

As a last example, Program 4.18 from page 376 helps Karel locate his home square in a tunnel. It as well uses a limiting assumption on the number of steps Karel can take:

Once more, the version based on the while loop is much simpler and more elegant:

Some languages provide the do-while or until loops. These are basically the same. The (big) difference vs. the while loop is that they execute the body at least once before the condition is checked at the end. However,

On the other hand, Python provides a for loop which is more powerful than the same type of loop in most other programming languages. Karel has the Python for loop, and we will get to it soon!

In this chapter we have only shown you the basic use of the while loop. There is much more to it. In the following chapters we will introduce the Boolean values True and False, as well as Boolean expressions, variables and functions. All these will expand the possibilities of what can be done with the while loop. Therefore, keep reading!

QUESTION 5.1. The while loop should be used when

QUESTION 5.2. Which of the following codes are valid?

QUESTION 5.3. At what time is the condition checked in the while loop?

QUESTION 5.4. Does the body of the while loop need to always be indented?

QUESTION 5.5. What forms of the while loop are valid?

QUESTION 5.6. When using the while loop, does one need to identify repeating patterns?

QUESTION 5.7. What is the First Maze Algorithm (FMA) designed for?

QUESTION 5.8. What are the limiting assumptions on the maze for the FMA to work correctly?

QUESTION 5.9. How can the FMA fail when the maze contains a dead end?

A
Karel can return to where he started.
B
Karel can run in an infinite loop.
C
Karel can crash.
D
Karel can stall without moving.

QUESTION 5.10. How can the FMA fail when the maze contains forks?

A
Karel can stall without moving.
B
Karel can crash.
C
Karel can return to where he started.
D
Karel can run in an infinite loop.

QUESTION 5.11. How can the FMA fail when the path is more than one square wide?

A
Karel can return to where he started.
B
Karel may miss some squares.
C
Karel can crash.
D
Karel can stall without moving.

QUESTION 5.12. What types of loops does Karel provide?