Learn How to Think with Karel the Robot. Chapter 2. Basic Commands

Let’s switch the Karel app in NCLab to Manual mode. Here, Karel can be guided by pressing buttons or certain keys on the keyboard. The keywords displayed on the buttons represent the five basic commands of the Karel language - go, left, right, get and put: 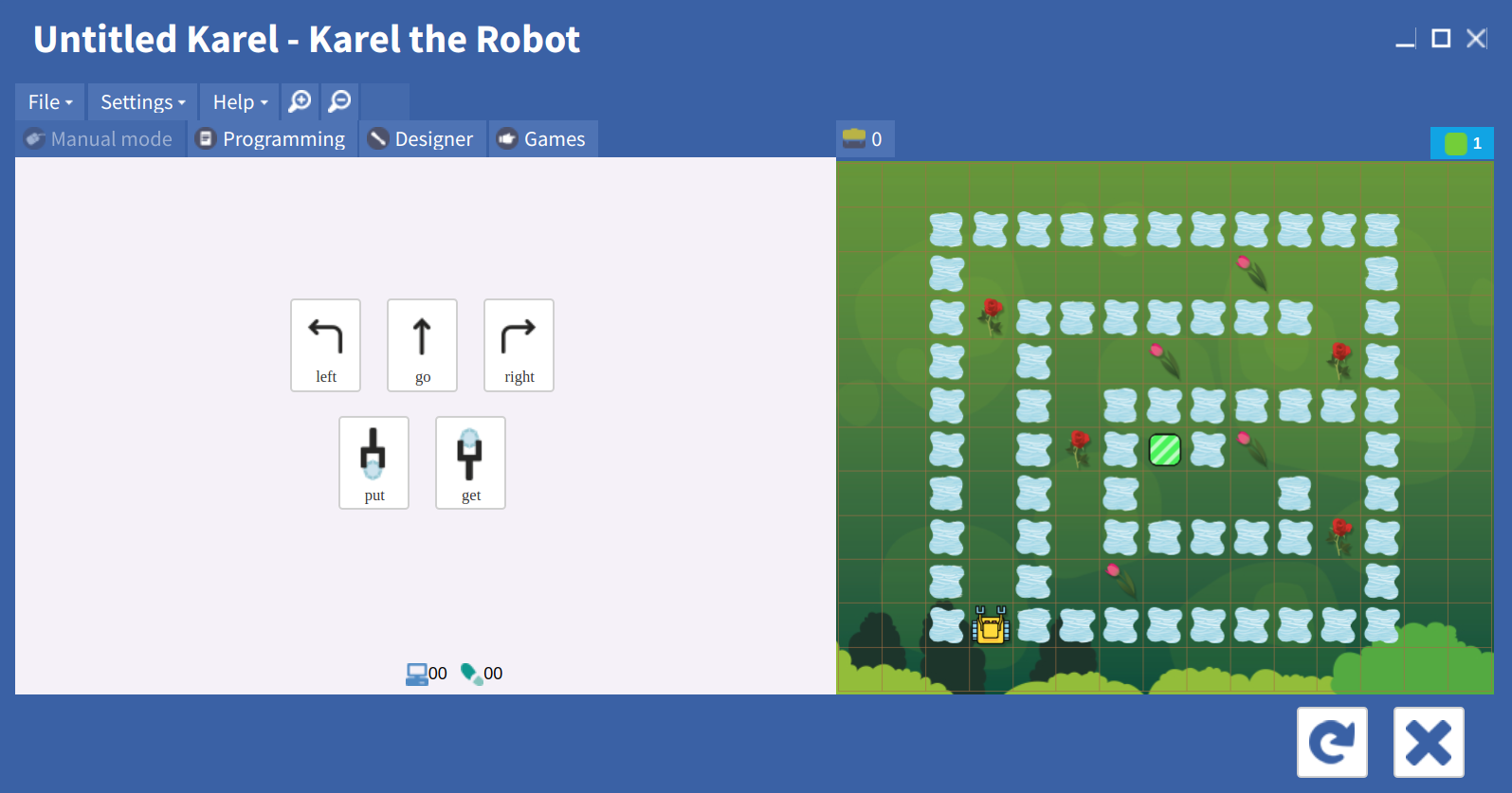 Before we go further, recall the four major directions on the compass - North, South, East and West: 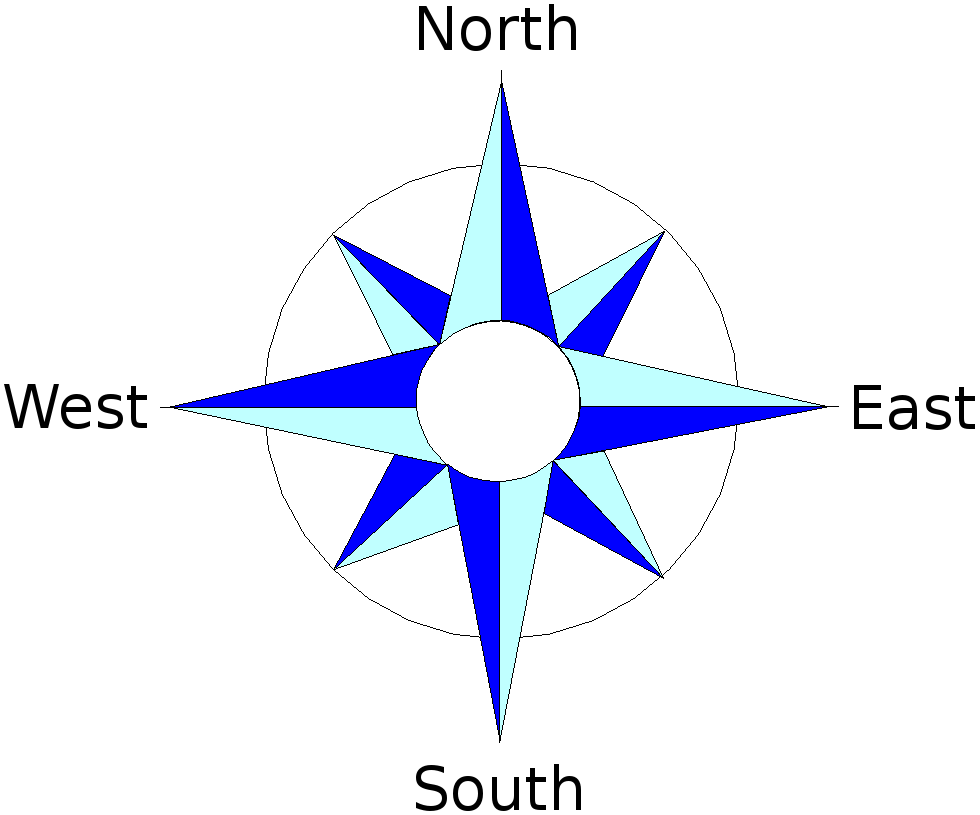 Four major directions on the compass.

The buttons change dynamically according to the direction which the robot is facing:

). These are the counters of operations and steps, respectively. An operation is anything the robot does - making one step forward, turning left or right, collecting an object, or placing an object on the ground. The number of operations is always greater than or equal to the number of steps. For example, when Karel makes a full 360-degree turn by executing four times the command right, he will do four operations but make zero steps.

In Manual mode, the robot can also be guided using the keyboard. The corresponding keys are highlighted in the image below:

2.4. Seeing the world through the robot’s eyes

In order to guide the robot correctly, one needs to see the world through the robot’s eyes. For example, when the robot faces North, then after turning right he will face East:

When Karel faces North, his right is your right.

But when Karel faces South, then after turning right he will face West:

When Karel faces South, his right is your left.

This is the same skill that you need to correctly read maps.

Now, let’s switch the Karel app to the Programming mode: 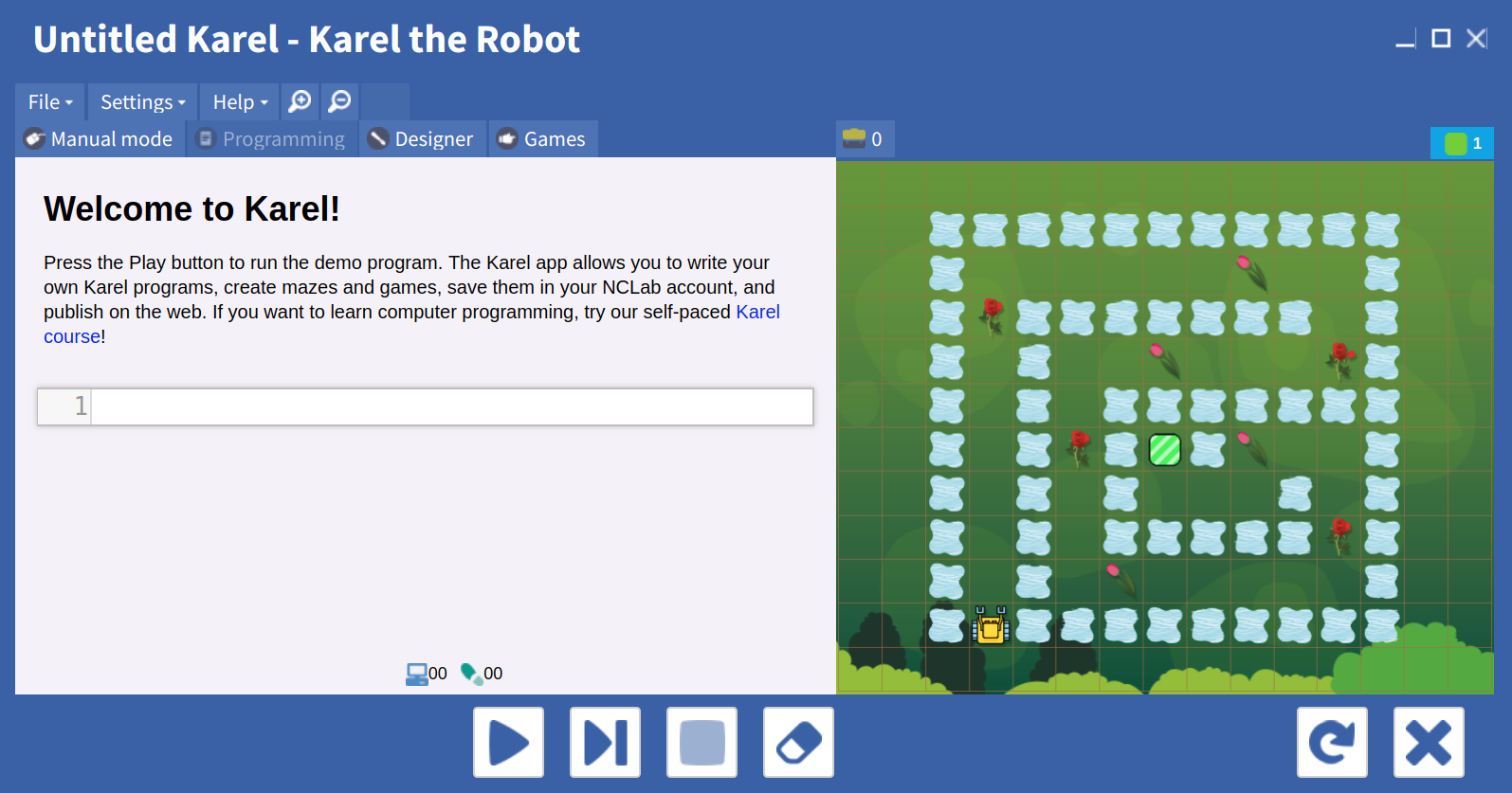 Here, the robot can be guided by typing commands. The code cell is located in the left panel. The control buttons are explained in the following table:

Karel will always follow your commands exactly to the letter - no exceptions. If the robot does something wrong, such as crashing into a wall, then most likely it was not his mistake but yours. Your algorithm was wrong.

Algorithms are usually written using a common English language. For example, look at this maze where Karel needs to collect the gears and return to his home square: 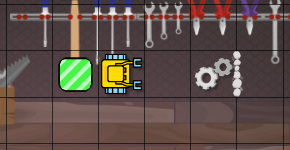 This task can be solved using the following algorithm:

2.7. Usually, a task has more than one solution

Almost every task has several solutions. Let’s stay with the previous one where Karel needs to collect the gears and return to his home square:

Check that this program also solves the task!

And here is yet another solution:

Can you find yet another solution?

Usually, one solution stands out by being the simplest or most elegant. But in this case, all the solutions are equally good.

2.8. How to recognize the best solution

Check out the following solution which also solves the above task. Can you visualize in your mind step by step what the robot is doing? Here is the maze again for reference:

This program solves the task, but it needs 12 operation while all the above programs only needed 8.

Sometimes we think that we know how to solve a task, but our solution is wrong. Staying with the above example, let’s say that we come up with the following algorithm:

Then we translate the algorithm to the following code, just to find out that it will not work!

Try to find the logical error before reading further!

Every programming language has its own syntax rules. These are important because the code is parsed by a machine. It cannot be vague or arbitrary. For example, the first two syntax rules for Karel are:

(1)
Always type one command per line.
(2)
Every command must start at the beginning of line.

Return for a moment to the codes above and verify that all of them satisfy these syntax rules! Of course, programmers are human, and therefore they make all sorts of mistakes. For example the program shown below contains a syntax error because two commands are written on the first line:

The following code violates Karel syntax rule #2 because of the indent on line 4:

Try to find three syntax errors in the following program!

2.11. Debugging and where did the word "bug" come from

Mistakes of either kind (logical errors or syntax errors) are called bugs and the procedure of eliminating them is called debugging. Depending on how careful one was while preparing the algorithm and writing the program, debugging takes either a short time or a long time. It does not happen often that a program works correctly right away.

BTW, do you know why programming errors are called bugs? The first computer “bug” was a real bug — a moth. In 1947, Rear Admiral Grace Murray Hopper was working on the Harvard University Mark II Aiken Relay Calculator, an electromechanical computer. Grace Hopper tells the story: “Things were going badly; there was something wrong in one of the circuits of the long glass-enclosed computer. Finally, someone located the trouble spot and found a moth trapped between points at Relay #70 on Panel F. Using ordinary tweezers, we removed the two-inch moth. From then on, when anything went wrong with a computer, we said it had bugs in it.” 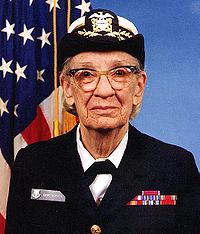 Grace Hopper’s legacy was an inspiring factor in the creation of the Grace Hopper Celebration of Women in Computing. Held yearly, this conference is designed to bring the research and career interests of women in computing to the forefront. The USS Hopper (DDG-70) is named in honor of Rear Admiral Grace Murray Hopper.

Karel has a bag where he stores all objects that he collects. Let’s return one more time to his workshop. This time there are four objects on the floor - a phone, watch, radio and a light bulb:

The robot can collect them using the following program:

In the next section we will show you how to shorten it to only three lines. For now, we will use it in this form. When the program finishes, Karel will have four objects in his bag:

The "bag" icon shows how many objects are in Karel’s bag.

When clicking on the icon, one can see all the objects. The most recently added ones are on top: 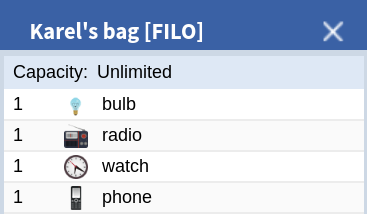 The contents of Karel’s bag.

Have you noticed the word FILO in the last image? It means that Karel’s bag is in FILO mode. FILO means stack in computer science. Let’s explain briefly what it does.

Let’s execute a program which makes Karel remove all objects from his bag and place them on the floor again:

Since the bag is in FILO mode, objects are removed from the newest to the oldest. So, the light bulb is removed first and the phone last:

Outcome of the program.

FIFO means queue in computer science. Karel’s bag can be switched to FIFO mode in the Maze menu of the Designer. FIFO is an abbreviation of "First In First Out" - objects will be removed from the bag in the same order as they were inserted. Here is the contents of the bag again, with the newest items on top: 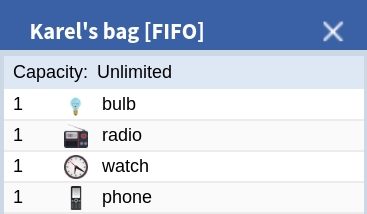 When the last program is executed again, the outcome will be different - the phone will be removed from the bag first and the light bulb last:

Objects are removed in the same order as they were inserted.

The Karel language is influenced by Python and as such, it is case-sensitive. This means that the case of letters matters. For instance, the Karel command to make one step forward is go. Any other version such as Go, GO or gO will not work - typing them will result into an error message stating that you are attempting to use an unknown command.

QUESTION 2.1. In Manual mode, Karel can be controlled using

A
buttons in the Karel app.
B
the keyboard.
C
written programs.
D
voice commands.

QUESTION 2.2. When Karel faces East, what direction will he face after turning right?

QUESTION 2.4. What command does Karel use to move one step forward?

QUESTION 2.5. What command does Karel use to turn left?

QUESTION 2.6. What command does Karel use to place objects on the ground?

QUESTION 2.7. What command does Karel use to pick up objects from the ground?

A
collect
B
get
C
lift
D
pick

QUESTION 2.8. In Manual mode, the Shift key represents the command

QUESTION 2.9. What is the equivalent to turning left?

QUESTION 2.10. What is the equivalent to turning right?

QUESTION 2.12. In Programming mode the button

QUESTION 2.13. Karel makes three steps forward, turns back, and returns to the square where he started. How many steps did he make?

QUESTION 2.14. In the previous question, how many operations did Karel do?

QUESTION 2.15. What statements are true about algorithms and programs?

QUESTION 2.16. What are the two basic syntax rules of the Karel language?

QUESTION 2.17. What of the following errors are logical errors?

A
Making an indent where it should not be.
B
Making a left turn instead of a right turn.
C
Typing two commands on the same line.
D
Making three steps instead of two.

QUESTION 2.18. What of the following errors are syntax errors?

A
Misspelling a command, such as typing rlght instead of right.
B
Crashing Karel into a wall.
C
Typing 1O instead of 10.
D
Using a command which Karel does not know.

QUESTION 2.19. What was the first programming "bug"?