Learn How to Think with Karel the Robot. Chapter 12. Randomness and Probability

12.1. Why is randomness useful in computing

Random numbers are used for many applications starting with gambling and creating unpredictable results in computer games. But one of the major applications of randomness is in cryptography. Cryptography is used to secure data for safe transfer via Internet, to secure data storage, and other tasks. Creating a reliable data encryption requires numbers that nobody can guess. Think about it - if a deterministic (non-random) algorithm was used to encrypt your data, then at least the author of the algorithm would always be able to break it, read your emails, enter into your bank account, or steal your identity.

Randomness is also very important for scientific and engineering simulations. For example, imagine that an engineer computes the strength of a bridge. He or she knows that all the physical properties of the underlying materials such as the quality of the concrete and of the steel come with some amount of uncertainty. Therefore, many computations with varying parameters must be done to ensure that this uncertainty is taken into account. These methods are called Monte Carlo Methods.

First, let’s use a repeat loop to generate and display 10 random integers between -1 and 1: 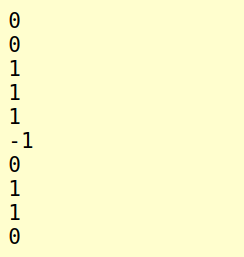 The following program generates 10 random integers between 1 and 100: 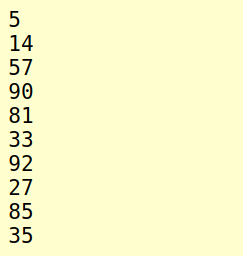 When rolling a die, one obtains a random integer between 1 and 6. The same can be done by calling randint(1, 6) or just randint(6). Today, Karel is curious how many attempts it will take him to throw a six. Here is the corresponding program:

Wow, that was quick! Beginner’s luck, probably. Let’s try this one more time!

Karel stands in the Southwest corner of the maze, facing East:

He carries one light bulb in his backpack, and his task is to place it at a random location in the maze. The maze is 15 squares wide and 12 squares tall. Here is a program which will do it:

Let’s execute the program two times. Keep in mind that the light bulb will not be visible because it will be beneath Karel at the end: 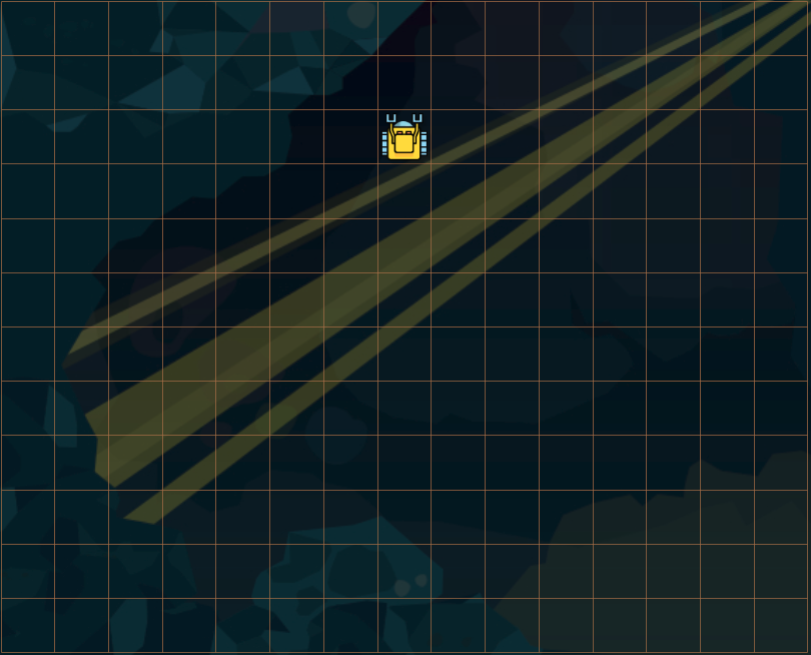 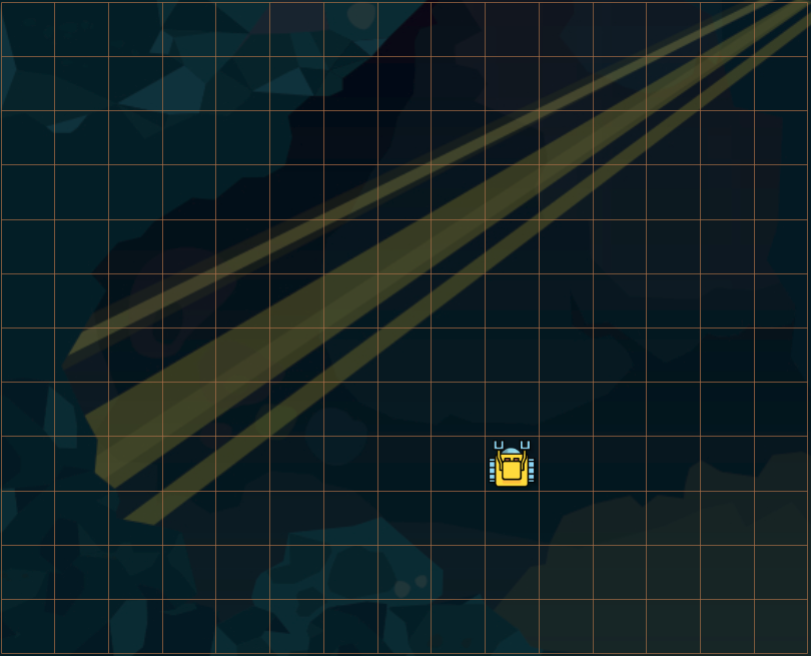 Today, Karel has 60 light bulbs in his bag, and his task is to use them to build a skyline. 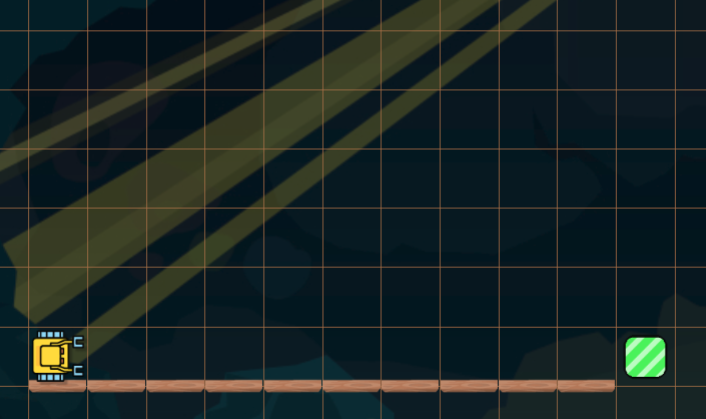 Karel’s new task is to build a skyline.

The skyline will consists of 10 columns of bulbs of random heights between one and six, such as this one: 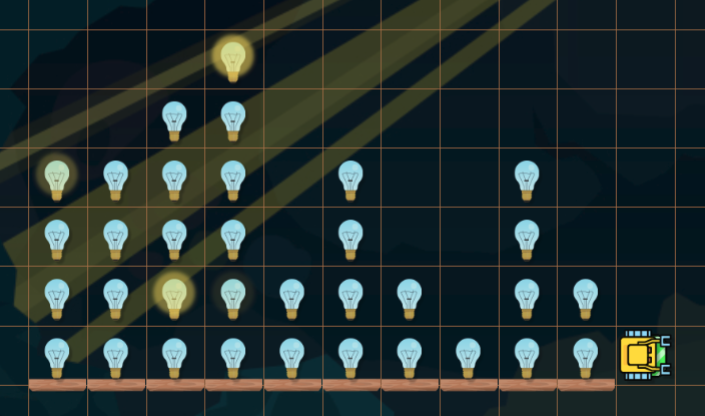 Let’s execute the program once more to show that the robot will create a different skyline: 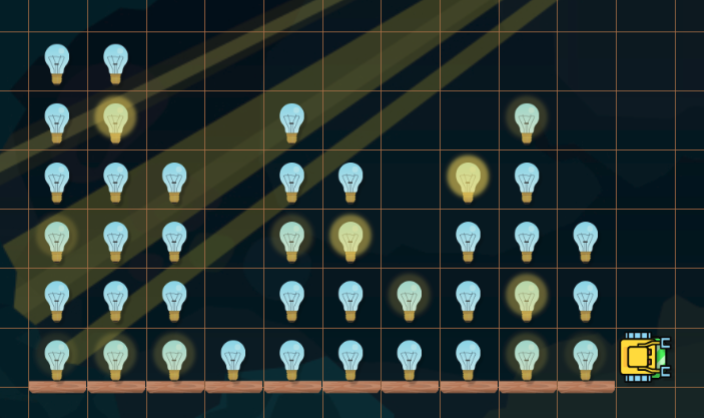 Executing the program one more time.

One important task in computer science is to calculate the maximum of a given sequence of values. Let’s take a look at a sample sequence 3, 4, 2.

As the first step, create a new variable named (for example) maximum, and initialize it with some value which is less than the lowest value in the sequence:

If you do not know how to safely choose a value which is below all values in the sequence, it is possible to take any value from the sequence. Usually it is easiest to take the first one:

We will take, for example, the initial value maximum = 0. Here is the algorithm:

There are as many steps as there are values in the sequence. Now let’s apply this algorithm to measure the height of a random skyline!

12.7. Measuring the height of a skyline 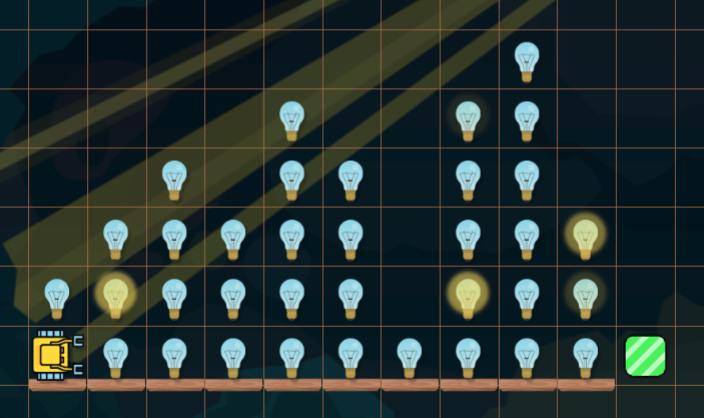 Karel is measuring the height of a random skyline.

To solve this task, the robot will employ the algorithm from the previous section. We will initialize maximum with 0, and measure the height m of each column. If m > maximum, he will update maximum to m. Otherwise he will leave maximum unchanged. Here is the corresponding program, enhanced with control prints to reveal in more detail what is happening:

For the skyline shown above, the program will produce the following output: 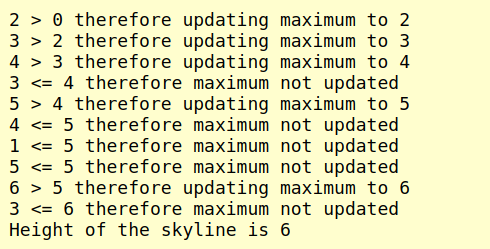 12.8. Measuring the height of a building

Today Karel needs to measure the height of an unknown building. The building is formed by columns of crates. 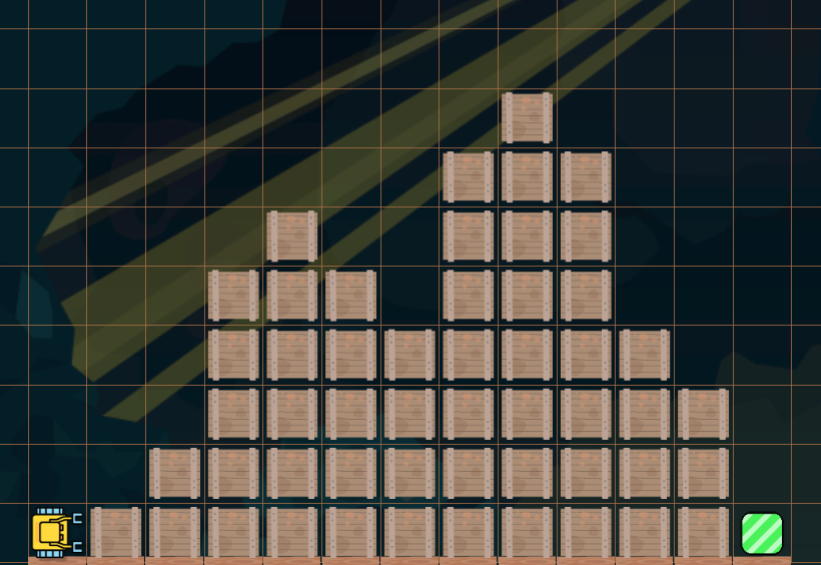 Karel is measuring the height of a building.

This task is different from the previous one because Karel cannot go inside the building (crates are obstacles). Instead, he will use the Second Maze Algorithm (right-handed version) to climb on the crates. He will initialize maximum with 0. After each step along the crates he will measure his gpsy coordinate m. Note that gpsy is the height of the column below Karel. If m is greater than maximum, then he will update maximum with m. This is the corresponding program:

And here is the output: 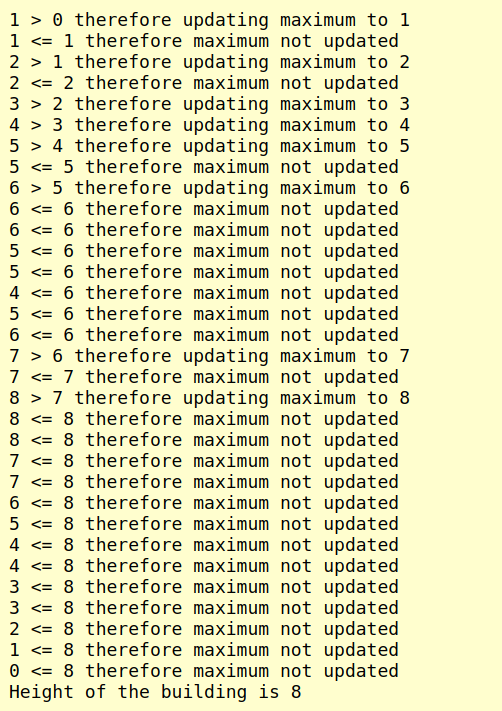 Let us illustrate the algorithm on a sample sequence 7, 9, 5. We will initialize the value of minimum with 10:

There will be as many steps as there are values in the sequence. Now let’s apply this algorithm to measure the clearance of an unknown cave!

12.10. Measuring the clearance of a cave

Today, Karel is exploring a cave. In order to know whether all his equipment will pass through it, he wants to first measure the clearance (minimum height between the floor and the ceiling). 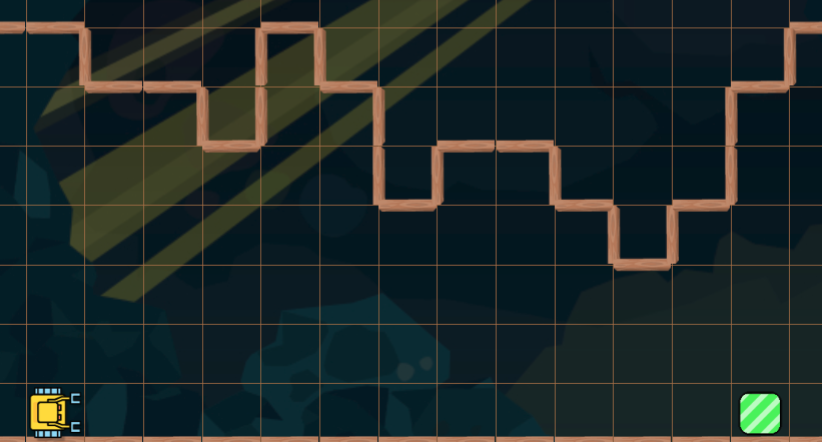 Karel is measuring the clearance of a cave.

He will use the algorithm from the previous section. Since the maximum height of the maze is 12 grid squares, a good initial value for minimum is 12:

Karel has a function rand which returns either True or False with a 50 % probability. In other words, there is the same chance of returning True or False.

For illustration, let’s call the function rand 10 times and display the result:

Calling the function rand is the same as tossing a coin. Today Karel does not know whether he should go to cinema or read a book. The following program which simulates a coin toss will help him decide:

So, Karel decided to go to the cinema today! 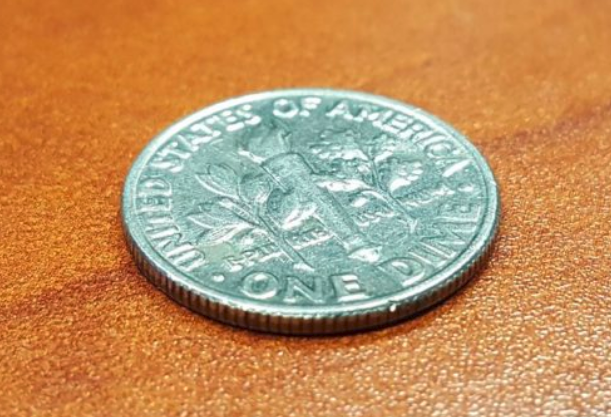 Now let’s say that we toss the coin twice.

Next, what is the probability of getting a 6 on a die? There is 1 favorable outcome: 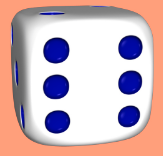 The number of all possible outcomes is 6:

12.14. Probability of events vs. their frequency

The probability of an event only is an approximate indicator for the frequency of that event. For example, the probability of getting heads when tossing a coin is 50 %. But this does not mean that one gets heads exactly one time when tossing the coin twice. Let’s get Karel’s help to explain this in more detail.

Karel wants to split the contents of his bag into two parts.

He will use the following program, starting with 20 ribbons:

And here is the result - 12 ribbons on the left and 8 on the right!

Let’s do this again, now with 100 ribbons (the number of repetitions on line 1 will be changed to 100). When the program finishes, there are 44 ribbons on the left and 56 on the right:

This number is the relative discrepancy between the frequency of the event and its predicted probability. As you can see, the value steadily decreases from 0.1 to 0.06 to 0.024. In other words, the relative frequency of the event is getting closer to its predicted probability. In mathematics, this is called the Law of Large Numbers (LLN). If you are interested, you can find more about it on Wikipedia.

As you can see, we also added a check for a wall on line 3 - without it, the robot would crash into a wall in no time. Here is the maze where we will try this program out: 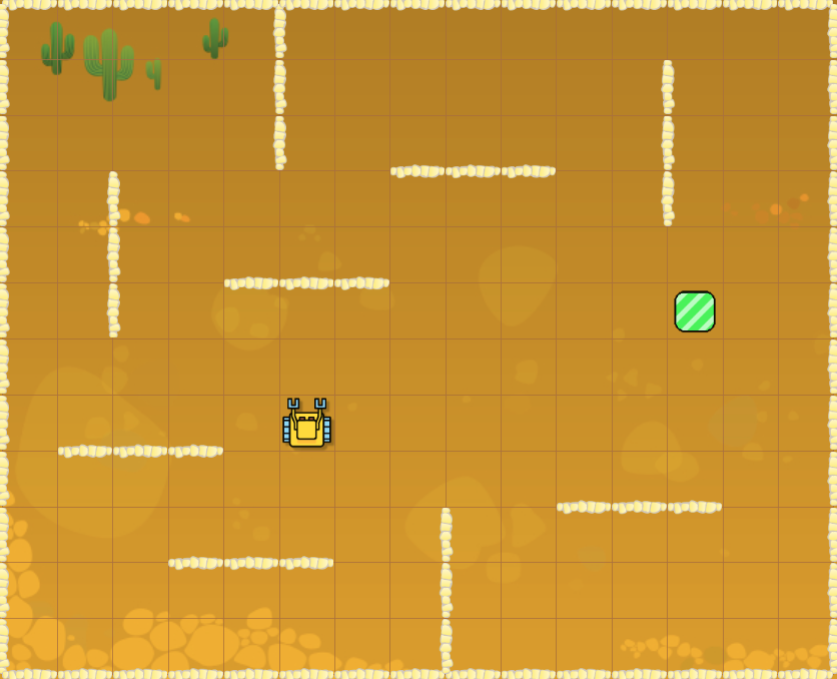 And here you can see where Karel went when the program was executed: 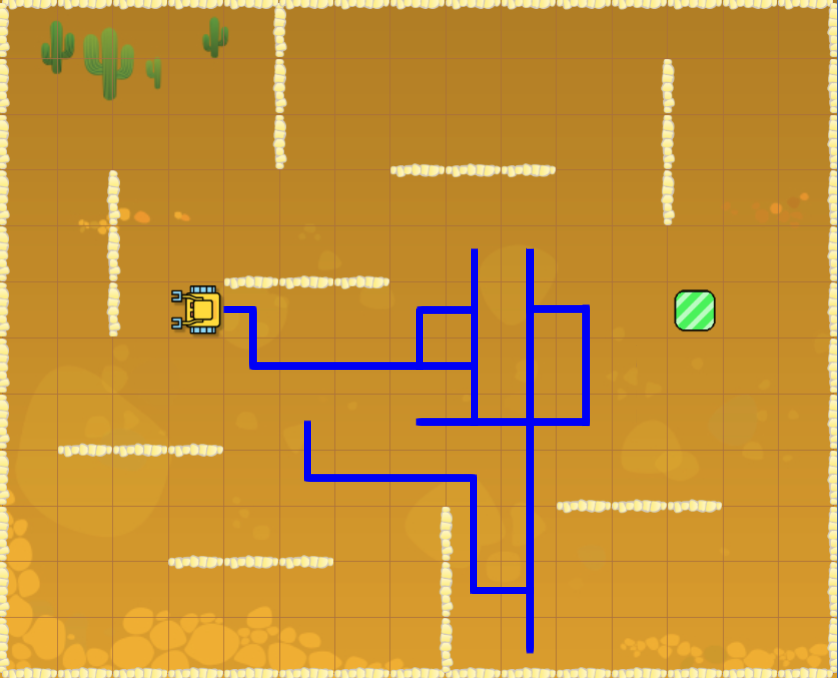 The trace of Karel’s random walk.

Notice a few "dead ends". They occur when Karel turns twice in a row and goes back. 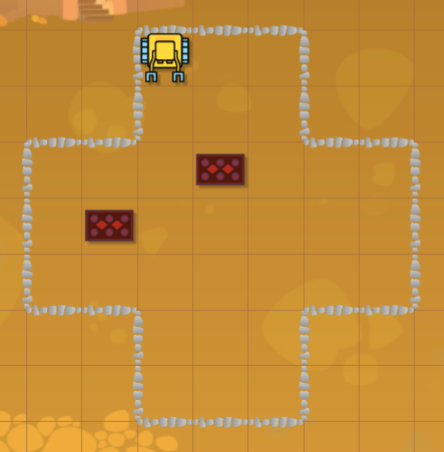 This maze is not suitable for the maze algorithms we know. The First Maze Algorithm fails to find the rugs (green line) and so does the Second Maze Algorithm (red line). 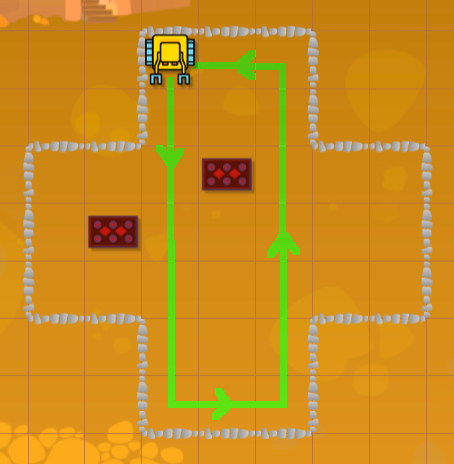 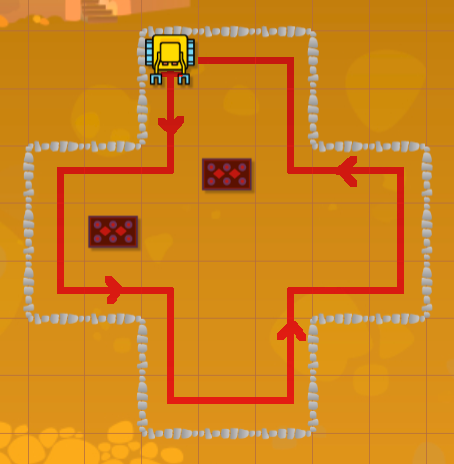 Both the First and Second Maze Algorithms fail.

Both these algorithms actually get into an infinite loop. One possible solution is to let Karel walk randomly in the maze until he finds the rugs. Well, for simplicity, let us have him stop after he finds the first one. Here is the corresponding program:

This works. Use the Karel App in NCLab to re-create the maze, and try it yourself!

QUESTION 12.1. Which of the following areas of computing benefit from randomness?

QUESTION 12.2. What function in Karel is used to generate random integers?

QUESTION 12.3. What is the equivalent of rolling a die?

QUESTION 12.5. If maximum is the current value of the maximum, and the next value is m, what condition is used to update maximum?

QUESTION 12.7. If minimum is the current value of the minimum, and the next value is m, what condition is used to update minimum?

QUESTION 12.8. When tossing a coin, what is the probability of getting heads?

QUESTION 12.9. When tossing a coin two times, what is the probability of getting heads both times?

QUESTION 12.10. When rolling a die, what is the probability of getting a 3?

QUESTION 12.11. When rolling a die, what is the probability of getting an even number?

QUESTION 12.12. When rolling a die two times, what is the probability of getting a combined score of 2?