2 Using Python as a Scientific Calculator

2.2 Why use Python as a calculator?

Python can be used as an advanced scientific calculator, no need to own a TI-89 ($140 value). Moreover, a TI-89 hardly can compete with the processing power of a desktop computer. In this section we will show you how to use this computing power - no programming needed. Let us begin with the simplest math operations.

Launch the Python app on NCLab’s virtual desktop, erase the demo script, type 3 + 6 and press the Play button. You should see what’s shown in Fig. 4: 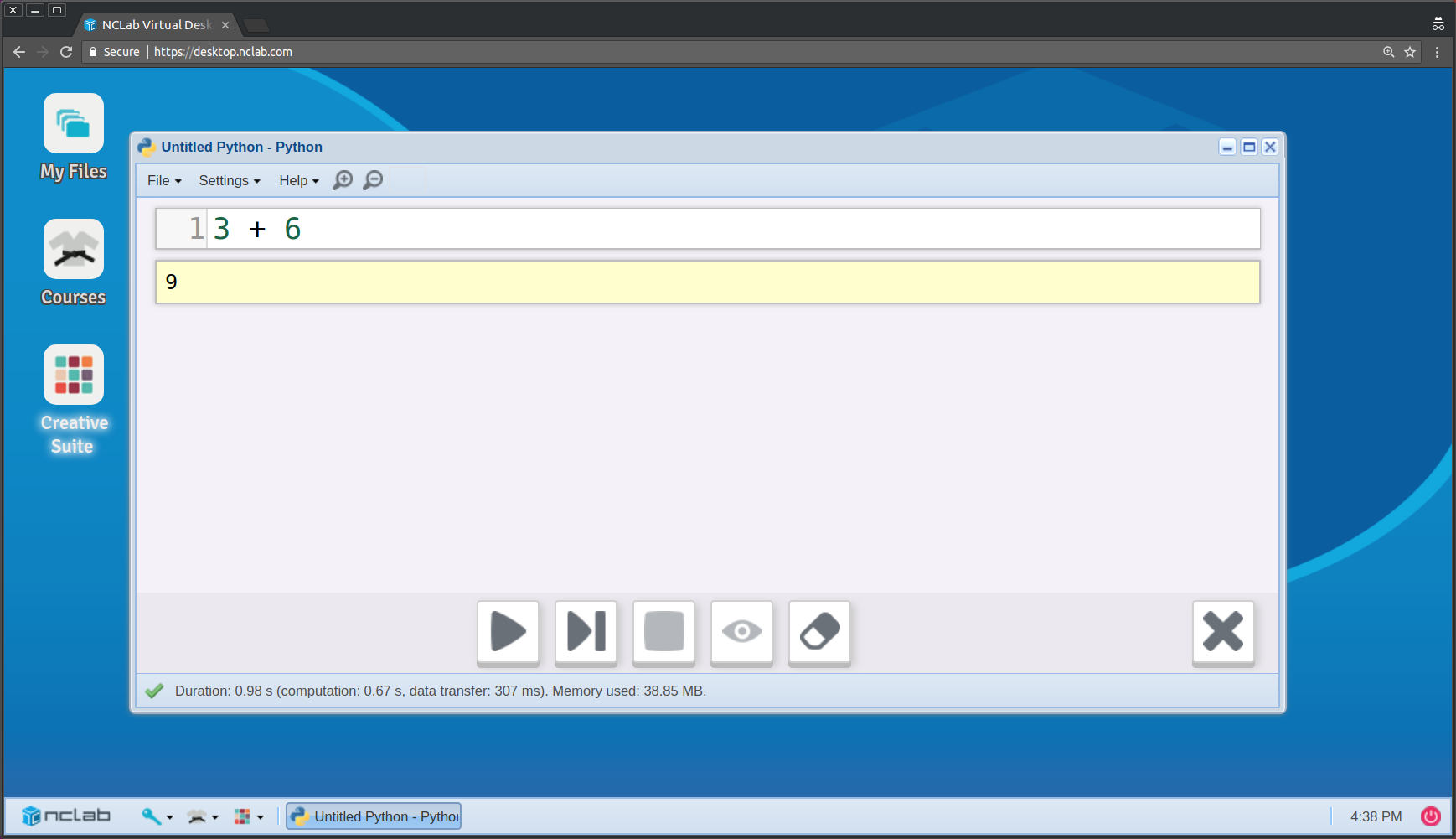 Of course you can add real numbers too:

Two numbers can be subtracted using the minus sign:

Multiplication is done using the asterisk ’*’ symbol as in

Indeed, real numbers can be multiplied as well:

The forward slash ’/’ symbol is used for division:

The floor division a // b returns the closest integer below a / b:

It can be used with real numbers as well - in this case it returns a real number with no decimal part:

Last, when one of the numbers a, b is negative, then the floor division a // b again returns the closest integer below a / b:

People who interpret floor division incorrectly as "forgetting the decimal part of the result" are sometimes confused by this behavior.

Modulo is the remainder after floor division, and often it is used together with the floor division. In Python, modulo is represented via the percent symbol ’%’:

Modulo can be applied to real numbers as well:

Both the base and the exponent can be real numbers:

But one has to be careful with negative numbers:

Note that no other brackets such as { } and [ ] are admissible in mathematical expressions. The reason is that they have a different meaning in the programming language.

To illustrate the priority of operations, let’s evaluate the following expression:

If you are not sure, it never hurts to use round brackets:

And as a last example, let’s calculate

Your code will be much easier to read if you use empty spaces on either side of arithmetic symbols, as well as after commas. In other words, you should never write congested code such as

The same can be written much more elegantly as

In order to calculate square roots, exponentials, sines, cosines, tangents, and many other math functions, the best way is to import Numpy. Numpy is a powerful Python library for numerical computations. To import it, just include the following line at the beginning of your code:

Here numpy is the name of the library, and np is its standard abbreviation (you could use a different one if you wanted). After Numpy is imported, one can calculate, for example, e2:

As you could see, one needs to add a prefix ’np.’ to the exp function to make it clear where the exp() function is coming from.

The reader surely knows that the cosine of 90 degrees (which is 90π∕180 radians) is 0. However, when typing

The reason is that:

It is important to get used to the fact that arithmetic calculations sometimes may yield "strange" values like this. In reality they are not strange though - on the contrary - they are natural. Because this is how computer arithmetic works. The reason why one usually does not see such numbers when using standard pocket calculators is that they automatically round the results. However, this is not a choice that should be made by the device - whether round the result or not, and to how many decimal places - should be the user’s choice. And that’s exactly how Python does it.

Python has a built-in function round(x, n) to round a number x to n decimal digits. For example:

And last - the number of decimal digits n can be left out. Then the default value n = 0 is used:

Elementary functions (and constants) that one can import from Numpy are listed below. We also show their arguments for clarity, but the functions are imported without them. Remember, the Numpy library is imported via import numpy as np.

Python provides many readily available mathematical functions via the Numpy library. To use them, import Numpy via the command import numpy as np.

Then a fraction such as 4/7 can be defined simply as fr.Fraction(4, 7). Fractions can then be added, subtracted, multiplied and divided as you would expect. The result of such an operation always is a fr.Fraction again. For example:

The Fractions library also provides a useful function gcd() to calculate the Greatest Common Divisor (GCD) of two integers. For illustration let us calculate the GCD of 867 and 629:

For the full documentation on the Fractions library visit https://docs.python.org/ 3.1/library/fractions.html.

Python provides a random number generator via the random() function that can be imported from the Random library. First let’s import the library as rn:

The random() function returns a random real number between 0 and 1. Calling

Of course, you will get different values. When we need a random number in a different interval, for example between 10 and 15, then we multiply the result of random() by the length of the interval (here 5) and add the left end point (here 10):

Sometimes we need to generate random integers rather than real numbers. This can be done via the randint() function. For illustration, a random integer between 1 and 3 can be generated via the code

Evaluating the code five times, one obtains a sequence of random numbers:

The Random library has a lot of additional functionality. For the full documentation visit https://docs.python.org/3/library/random.html.

Appending ’j’ or ’J’ to a real number makes it imaginary. Let’s calculate i2 which in Python is represented as -1 + 0j:

One can also define them using the built-in function complex():

All arithmetic operations that are used for real numbers can be used for complex numbers as well, for example:

To extract the real and imaginary parts of a complex number z, use z.real and z.imag. Use abs() to get the absolute value: